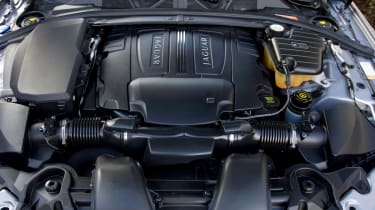 The third plank in Jaguar’s raft of new engines is the one that will probably sell the best of all, the 3-litre enlargement (up from 2.7 litres) of the twin-turbo diesel V6. But why should that be of interest to us at evo?

Because in its more potent S guise, in which it is still rated at the same 179g/km CO2 as the non-S version, it makes not only 271bhp but also a stonking 443lb ft of torque. That’s not far short of the XFR/XKR’s 461lb ft, and it peaks at just 2000rpm. The result is an XF which – whisper it – is a more engaging drive than the new naturally aspirated 5-litre V8 petrol version.

Really? Ignoring the engine and its ingenious sequential turbos for a moment, the XF Diesel S has lighter, crisper, more linear steering and an altogether more agile feel, generating the sensation that you can corner incredibly quickly without having to commit yourself to one immutable line. It rides more deftly, too. The lighter nose is presumably why.

And the engine? It sounds like a proper V6, with the diesel granularity fading into the background once warmed through, and the torque flings it up hills as if they weren’t there. The Dynamic button doesn’t alter the suspension here but it still sharpens the accelerator response usefully, and in Sport mode the automatic gearbox is less prone to manic downshifts than in the V8 because they are pointless in a torquey diesel. It’s still unwilling to shift into fifth and sixth, though, unless you return to Drive or do it manually.

With less distracting activity from the gearbox, the XF DS feels calmer at speed on a twisty road than the V8 and no less rapid. This is a great car, surely the second-best XF after the R. It manages the all-occasions versatility of mood the V8 now misses.