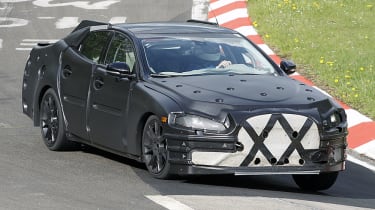 You cannot see it from these pictures of a heavily camouflaged, early prototype, but the new Jaguar XJ’s design has been confirmed to be radically different from that of today’s car and much more daring than that of the XF. According to Jaguar’s chief of design, Ian Callum, the reason is that the XJ is a model selling in considerably lower figures than the XF. Whatever that will mean, what you see here is first shots of the new car, disguised in a way we’ve never before seen a Jaguar being disguised! On the other hand, the underpinnings of the new executive saloon aren’t completely new as Jaguar decided to just modify the existing all-aluminium platform to re-use it for the code-named X351 which will make its official debut as soon as July this year! With Ian Callum’s praise of the Mercedes CLS’ styling in mind we reckon the new Jaguar XJ will combine the idea of a four-door coupé with traditional Jaguar design elements. What we’ve discovered while examining the pictures closely is that the new XJ will apparently be offered in two lengths. As our pictures prove, the car will come in LWB and SWB guise, clearly visible by comparing the rear side doors of the two cars photographed.