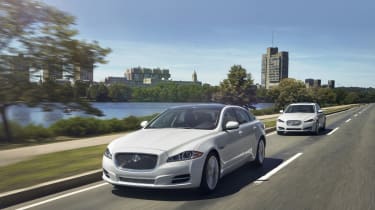 Four-wheel-drive Jaguars are on the way. The British manufacturer has confirmed that 2013 model year XFs and XJs will get an AWD option. Jaguar’s AWD system has undergone 18 months of winter testing, and the expertise of its sibling company Land Rover has been used to the full. It’ll be mated exclusively to Jaguar’s new supercharged 3-litre V6 petrol engine, which debuts on the updated XF and XJ before appearing in the firm’s new F-type sports car.  When hooked up to the new AWD system, the V6 will send most of its 335bhp and 332lb ft to the rear wheels unless low-grip conditions require otherwise. Driving conditions are continually monitored and torque is split up to 50/50 between front and rear axles should grip be particularly low. Jag is keen to emphasise that the XF and XJ’s rear-drive characteristics remain important, though.  And there’s been a host of engineering tweaks to ensure that’s the case – changes to the power steering setup and new front steering knuckles are said to keep feel at the wheel the same, while the front suspension of both cars gets new springs, dampers and anti-roll bars. The XJ gets a new rear anti-roll bar, too. Front driveshafts run through the engine sump to ensure the cars’ centre of gravity remains as low as possible, while their adaptive suspension systems get new settings. Both the XF AWD and XJ AWD get an eight-speed ZF auto gearbox as standard, and they boast identical performance figures; 0-60mph takes 6.1sec while top speed is limited to 155mph. Fuel economy for both is 28.8mpg (European), while CO2 emissions are 234g/km. The move to AWD signals Jaguar’s intent as a global brand. Most all-paw XFs and XJs will be sold in North America, Russia, China and continental Europe, with demand coming from markets whose climates dictate a need for four-wheel drive. More than three quarters of the initial build will go to the US, while in the UK, demand is low enough for the models not to feature in Jaguar’s 2013 plans.