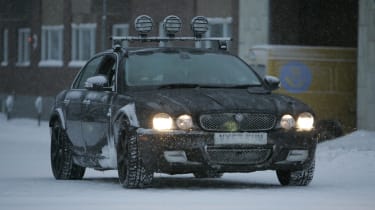 You cannot see it from these pictures of an early test-mule, but the new Jaguar XF’s design has been confirmed to be radically different from that of today’s car and much more daring than that of the new XF. According to Jaguar’s chief of design, Ian Callum, the reason is that the XJ is a model selling in considerably lower figures than the XF.

Whatever that will mean, what you see here is the new car’s underpinnings married to the existing model’s sheetmetal, though the latter had to be adopted here and there to fit the wider track and other technical parts. Those underpinnings, however, aren’t completely new as Jaguar decided to just modify the existing all-aluminium platform to re-use it for the code-named X351 which will make its official debut in spring 2011.

With Ian Callum’s praise of the Mercedes CLS’ styling in mind we reckon the new Jaguar XF will combine the idea of a four-door coupé with traditional Jaguar design elements.