542bhp and an easy 200-plus top speed weren't enough for Jag's XJ220, which just missed the speculative market window 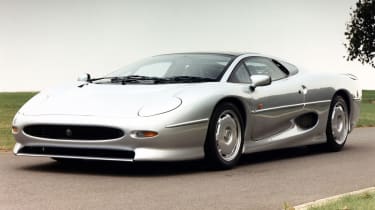 Scan the ‘supercars’ section in The Knowledge and, with the notable exception of the products from a certain manufacturer in Stuttgart, you’ll find very few with fewer than eight cylinders. At that level it’s just not the done thing. So it’s all the more unusual that one of the largest supercars ever built should be powered by a relatively tiny V6…

Of course, when Jim Randle, Jaguar’s director of product engineering, sketched his idea for a new supercar at the end of 1984, he envisaged it with a V12, just like the company’s Group C racers of the time. This was the car that the ‘Saturday Club’ – as Randle and his small group of likeminded designers and engineers who gave up their free time to work on the project became known – set out to create.

By October 1986 Jaguar bosses had approved funding for a one-off show car and the team had gained the support of a number of third-party suppliers. With Group B regulations and a 200mph top speed in mind, the car was given a 6.2-litre, 500bhp version of Jaguar’s production V12, a bonded aluminium chassis from Alcan, an integrated steel roll cage, underbody Venturis for extra downforce, a four-wheel-drive system from FF Developments, AP Racing brakes with ABS, and race-derived double-wishbone suspension designed to accept four-wheel steering.

All that hardware, and a cabin suitably civilised and well-appointed for a Jaguar, meant the aluminium body that surrounded it ended up being unusually large – over 5 metres long and 2 metres wide – but it was a stunning shape. Penned by Mark Lloyd (today one of Citroën’s top designers) and developed by Keith Helfet (who would later be responsible for the F-type concept), it was modern yet thoroughly Jaguar.

The completed prototype appeared in October 1988, at the British motor show in Birmingham. With public and press suitably tantalised, the car was then handed to JaguarSport – Jag’s joint venture with Tom Walkinshaw Racing, who ran the Group C cars – to evaluate its suitability for production.

The verdict wasn’t good. It was reported back that it was too heavy for road tyres capable of 200mph and that, in a 500bhp state of tune, the V12 engine would not meet increasingly stringent emissions. So, to reduce weight, the 4wd system was jettisoned, the ABS went too, and the car was shortened by 210mm, some 205mm of which was taken from the wheelbase, a move made possible by the most controversial change of all: the introduction of a twin-turbocharged 3.5-litre V6.

Race-developed it may have been – it was a version of the engine from the XJR-10 and 11 and had been seen in the Metro 6R4 – but typical supercar fare it was not. Nevertheless, with 542bhp it would enable the XJ220 to comfortably exceed 200mph and claim its place as the fastest production car ever (212.3mph in production trim, 217.1 with cats removed and rev limit raised), and when a production run of a maximum of 350 XJ220s was officially announced in December 1989, the choice of engine didn’t stop Jaguar receiving 1500 applications in 48 hours.

But by the time production began at JaguarSport’s plant at Bloxham, Oxfordshire, over two years later, times had changed. The supercar boom was over, the speculators had gone, and the UK price of over £400,000 looked absurdly high. Customers were asking for the return of their £50,000 deposits. To add to the problem, more than a few eyebrows had been raised when, in late 1990, JaguarSport launched the TWR-developed XJR-15. Although based on the XJR-9 Group C car and marketed as a racer, it was road- legal and came complete with the V12 that had been deemed unsuitable for the XJ220…