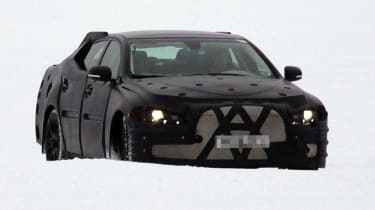 Jaguar is out testing its brand new XJ executive saloon, and for once we'll be able to decipher it as all-new thanks to revolutionary rather than evolutionary styling. Thank the XF's success for that, the model propping up the Jaguar range through the troubled car market and marking Jag out as one of the few manufacturers to report a rise in sales.

At the Geneva motor show the new XJ was described as ‘challenging convention’ by Jag bosses, and that we’ll see the car in a few short months – that should roughly translate as a concept of the car appearing in time for the Frankfurt motor show in September.

The smattering of black cladding on this test car disguises plenty, the styling enjoying a pretty big overhaul, but look closely and thin but shapely headlights can be seen, similar to those seen on the C-XF concept that foresaw the production XF. Apparently Jag designer Ian Callum is a big fan of the coupe-like Mercedes CLS, so expect some influences from that car on the XJ. The car should also bear a close resemblance to the XF, looking at the shape of this mule - it looks very much the longer, sleeker version of its BMW 5-series sized sibling.

Underneath, things look set to remain largely similar to the current car. No bad thing; the aluminium chassis of the XJ is pretty sound, and at least on par with rivals. The retro looks of the current car's exterior manage to hide the technology that lies beneath. Jaguar's engine range is good, too – expect the XF’s new twin-turbo 3-litre V6 diesel and the company’s new 380bhp 5-litre V8 (and its supercharged 503bhp sibling) to be the stars of the range.

Keep checking evo.co.uk for updates on a car we’re pretty excited for. The talents of the current XJ (and XJR) wrapped in a more stylish and modernised body sounds like a winner.