Jaguar F-type at the Paris show

After months of teasing, the new F-type has finally been unveiled. Full story and gallery here 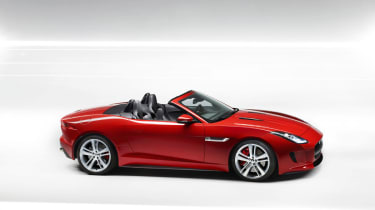 Jaguar has released full technical details on the new F-Type roadster during the official unveiling ahead of its first public showing at the Paris Motor Show. To begin with, a supercharged V6 engine in two states of tune and a range-topping V8 will be offered. Despite its aluminium construction, at 1597kg for the V6, the F-Type is heavier than we were expecting – weighing between 150kg and 200kg more than the slightly bigger Porsche 911 Cabriolet.

With 335bhp the entry-level 3-litre version will be plenty fast, able to dispatch the 0-62mph dash in just 5.3 seconds. The more powerful ‘S’ version of the supercharged V6 has 375bhp and trims the acceleration time to 4.9-seconds. And the 5-litre V8 has a mighty 488bhp and dispatches the dash to 62mph in just 4.3 seconds. Unusually, Jaguar has chosen to give the three cars different speed limiters, with the basic 3-litre limited to 161mph, the 3-litre S limited to 171mph and the V8 S limited to 186mph.

Jaguar claims the F-Type’s aluminium bodyshell is 10 percent more rigid than that of the XKR-S coupe. Suspension is by double wishbones at each corner and electric power steering will be standard. The most basic model will get conventional dampers, the two ‘S’ variants having an adaptive damping system with the choice between soft and firm settings. All versions will have a ‘Dynamic’ mode to switch the steering assistance, gearbox management and throttle mapping into a more aggressive setting.