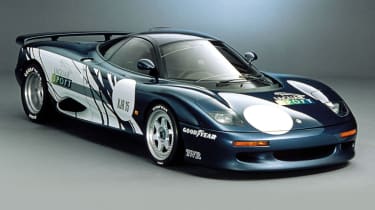 If the term ‘supercar’ had been around in the 1950s, it might well have been applied to Jaguar’s stupendous XKSS, essentially the Le Mans-winning D-type in roadgoing form. Jaguar produced many great sports cars over the years, of course, from XK120 to E-type to current XKR-S. But only two actual supercars have worn the Jaguar badge, and, by a slightly uncomfortable coincidence, they came out within months of each other…

Built specifically for a race series called the Intercontinental Challenge by Jaguar Sport, a subsidiary of Tom Walkinshaw Racing (TWR), the XJR-15 was essentially an XJR-8 Le Mans car with an all-new Peter Stevens-designed Kevlar and carbonfibre body. Unlike the turbo V6-engined XJ220, it was powered by a normally aspirated 6-litre V12 engine, developing 450bhp, and retained the race car’s basic chassis layout. To many enthusiasts, its taut, feline lines combined with the fact that it had a V12 engine made it an attractive alternative to the ‘official’ Jaguar supercar.

Weighing just 1050kg, the XJR-15 could sprint to 60mph in 3.9 seconds and was geared for a top speed of 191mph. In race trim, the full ground-effect body endowed it with very serious cornering pace. But as a road car the XJR-15 was unapologetically raw, hardly bothering to mask its competition roots.

For customers brave enough to want to use the car on the road, Jaguar Sport fitted bumpers, indicators and raised the overall ground clearance. Unfortunately, this had rather malign consequences for the handling as the undertray aerodynamics and suspension were optimised for the ground-skimming ride height. The result was a car that always felt on the edge of oversteer. And, when it came, it required very quick and accurate correction, or else. That Stevens-penned body was beautiful, mind.