Peter Tomalin's still impressed by the Jag, and judging by the public's reaction, they are, too 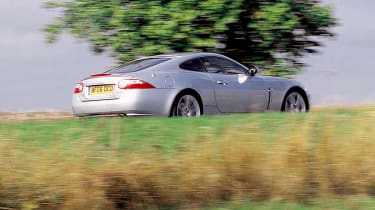 It seems slightly strange to be pressing the Jaguar into service to collect the Westfield’s gearbox, but hey, might as well make use of that hatchback. I’m sure Denis Jenkinson would have done the same with his old MotorSport long-term E-type (the original Jaguar hatch). It’s actually a pretty accommodating loadbay, wide and long if not especially deep. Certainly it has swallowed the boys’ cricket gear time and again this summer without complaint – I just wish I could say the same about the back seats and the lads themselves. Freddie’s little joke about reporting me to Childline if I make him get in the back is starting to wear a bit thin. He did, however, redeem himself when, as we approached the Jag the other day, he commented that it looked ‘quite a lot like an Aston Martin’, which in Freddie’s eyes is as big a compliment as it’s possible to pay.

The starter button is still playing up, and it seems BF06 DCO is not alone in this. Melvyn Young wrote to say that it often takes three or four attempts before his XK fires up, and on two or three occasions it’s taken over 20 minutes. He does add, however, that the car is ‘in all other respects fabulous’. Another correspondent, Chris Sharp, was told by Jaguar Assist that he was not pressing the brake pedal down hard enough (the pedal has to be depressed for the starter to work). ‘At six foot two and fourteen stone, I was pretty miffed at such a suggestion!’ he writes. He has, however, found that if he presses the starter button first and the brake pedal second, his car starts first time every time. It’s taking me a while to get the sequence ingrained, but by Jove, I think he’s got it!

Like Young, Sharp seems otherwise deeply impressed by the new Jaguar, as am I. The reaction of the public, too, is emphatically favourable. Just goes to show what a reservoir of enthusiasm there still is for Jaguar, if only it could build the product to tap into it. The XK seems to be perfectly pitched. The next S-type sounds promising too, but it really can’t come soon enough…