The Jaguar XK comes off second in a battle with some storm debris, but Harry's still impressed on a West Country cruise 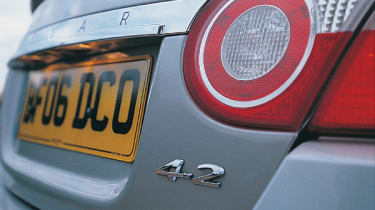 Remember the high winds that lashed the country back in January? Trees uprooted, roofs torn off, pensioners blown across whole counties, etc, etc. Well, one casualty that didn’t quite make the six o’clock news was the XK. I stepped out of our front door that morning to be met by a scene of carnage on our drive. Well, maybe not quite carnage, but the boys’ basketball hoop and its supporting stand had been snapped at the base and had come crashing down on the Jag.

It was a horrible moment. As I walked towards the stricken XK I had visions of a badly dented wing and bonnet, necessitating new panels, resprays, insurance forms and all the associated aggravation. So you can imagine my relief to discover that it had sustained nothing as much as a small dent, the only damage being a cluster of squiggly scratches that looked like the work of a particularly furtive vandal. The combination of aluminium structure and plastic outer skin – as championed by Gordon Murray in these very pages last month – had proved more than a match for the hurricane/basket combo.

It was a relief because I don’t like to be parted from the Jag for too long. This was brought home to me when Harry Metcalfe took the XK off to the West Country for a few days last month (apparently he’s buying some land down there, Devon I think it’s called). ‘Love it’ was his summary as he handed back the key. ‘The way you can be cruising serenely one minute, then you need to overtake and it kicks down so smoothly and boof! you’re past. Great car, 26mpg too. I don’t get more than that in the Clio…’

I reckon that’s down to a very efficient engine, a slippery shape and near-optimum gearing. Lord M was so impressed that he commandeered the Jag for the annual pilgrimage to the Geneva Salon a few weeks later…