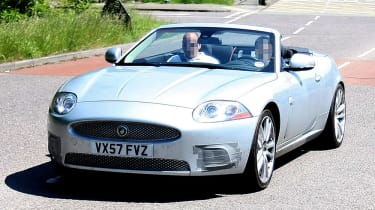 It seems to go better since Indian firm Tata holds the key to the Jaguar cage: a prototype for Jaguar’s facelifted XK has been spotted testing in the UK ahead of the updated model’s debut at the Paris Motor Show in November. The new cat will go on sale early next year and will feature several styling and mechanical updates to distinguish it from the current car. Visual changes include a new front bumper with revised air intakes positioned below the headlights, plus a redesigned rear bumper and LED taillights. The changes will appear across the lineup and will also feature on the performance XKR range and likely also the extreme XKR-R due next year. The final change is the new shark-fin antenna on the coupe’s deck lid. Previous versions featured a power-retractable antenna or rear-spoiler integrated unit. While the engine lineup will remain relatively unchanged, the new XK range is likely to benefit from a stiffer suspension set-up and recalibrated steering. The interior, meanwhile, will be fitted with Jaguar’s new drive-select transmission interface lifted from the XF saloon.