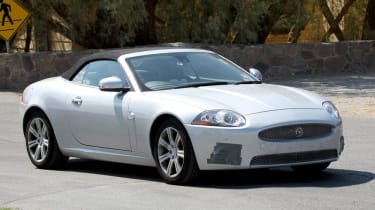 The new Cat will go on sale early next year and will feature several styling and mechanical updates to distinguish it from the current car. Visual changes include a new front bumper with revised air intakes positioned below the headlights, plus a redesigned rear bumper and LED taillights. The changes will appear across the lineup and will also feature on the performance XKR range and likely also the extreme XKR-R due next year. The final change is the new shark-fin antenna on the coupe’s deck lid. Previous versions featured a power-retractable antenna or rear-spoiler integrated unit. While the engine lineup will remain relatively unchanged, the new XK range is likely to benefit from a stiffer suspension set-up and recalibrated steering. The interior, meanwhile, will be fitted with Jaguar’s new drive-select transmission interface lifted from the XF saloon.