Jaguar to race at Le Mans 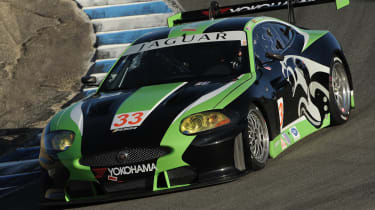 Jaguar will return to the Le Mans 24 hour race this year.

The team last won the legendary La Sarthe endurance race twenty years ago in the Silk Cut liveried XJR-12 racer, but has had a distinctly low-key motorsport presence since. Jag's less than successful Formula 1 entry early last decade is the firm's only recent global motorsport appearnce.

2010 will see that change, though, with a Jaguar XKR entering the Le Mans GT2 class courtesy of JaguarRSR. Expect it to bear a strong resemblance to Paul Gentilozzi's XKR racer (main picture), though the XKR Goodwood Edition (lime green car pictured) could be a clue to liveries the Le Mans Jag could possess.

Gentilozzi will drive the XKR GT2 in the American Le Mans Series (ALMS), and he's Principle Partner at JaguarRSR. He's remaining pretty grounded about the XKR's chances in the 24 hours, but is urging us Brits to get behind Jag's Le Mans return: 'Spirits will be high around Jaguar’s return to Le Mans but we must remember the incredibly high level of competition - a podium place in our category will not fall into our hands. That said, I can guarantee 100 per cent commitment from JaguarRSR and urge fans of Jaguar and Britain’s racing heritage to support the team whole heartedly.'

Jaguar has been rather successful in Le Mans over the years, with the fourth highest win count (seven overall victories between 1951 to '90). A GT2 entry won't see that increase, but could pave the way for a full-strength Jag onslaught in years to come.

Keep your eyes on evo.co.uk, as updates from Jaguar are due.