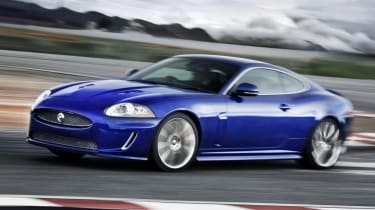 Jaguar’s fastest ever XKR coupe will take pride of place on the company’s Geneva motor show stand. Rather than being a fully-blown performance upgrade or ‘Clubsport’ special, though, it’s a ‘Speed Pack’ which extends the speed limiter from 155 to 174mph via a new engine and transmission recalibration.  Having passed the Jaguar’s 155mph ‘soft limiter’ and seen 170mph+ in a regular XKR, we’d assume one equipped with the Speed Pack is capable of closer to 200mph. That’s despite the supercharged 5-litre V8’s 503bhp and 461lb ft remaining intact.  As well as the more casual limiter, the key changes are aerodynamic and cosmetic: a revised front splitter and larger rear spoiler are intended to aid the XKR’s balance, while there are new mesh grilles, some chrome finishing, red ‘R’ badged brake calipers and a set of 20in Kasuga alloys. If those tweaks don’t quench your stylistic thirst, then the XKR Black Pack should help. It adds an abundance of gloss black finishing to the car’s exterior, alongside 20in Kalimnos alloys (in a matching finish) and the option of that Porsche GT3 RS-style side graphic. The Speed Pack costs £3500 while the Black Pack is £4000, the latter only available in conjunction with the former. An XKR coupe (the only XK to get these mods) with both packs will set you back £82,455, and a car in just that spec will be gracing Jag’s Geneva stand. What are your thoughts? Should Jaguar have gone further, and are graphics right on a supercharged gran turismo? Let us know on the evo forum. Head this way for all the performance car stars of Geneva ‘10 Follow evo on Twitter and Facebook for car news and views