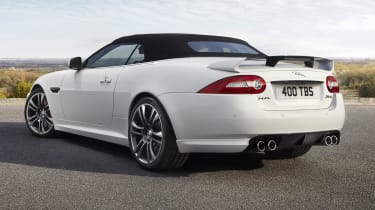 Jaguar has found itself a niche within a niche, with the official debut of the new XKR-S cabriolet at the Los Angeles motor show.

Pitched as the company’s most powerful cabriolet ever, the ragtop XKR-S is powered by the same 5-litre supercharged V8 as its coupe sister, meaning 542bhp and 501lb ft of torque. Jaguar claims identical performance figures to the alloy-roofed version, with a 4.2-second 0-60mph time and an electronically limited 186mph top speed. The car has been tested with its roof down at full speed, and Jaguar claims that – like the coupe – its capable of lapping the Nurburgring Nordschleife in under 8 minutes.

Chassis changes over the standard XKR include stiffer springs and dampers, a revised rear geometry and different front steering knuckles with recalibrated steering. The bodykit is claimed to reduce aerodynamic lift by 26 percent over the XKR.

Prices are yet to be confirmed, but the XKR-S’s position at the top of the model tree means it’s likely to break records for Jaguar pricing as well as performance, becoming the company’s most expensive model since the XJ220 supercar. Anticipate having to pay over £100,000 for one.