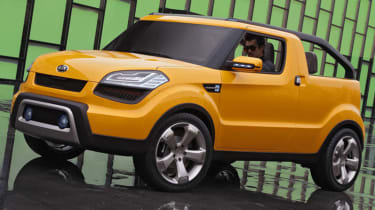 It may not look at it first, but this Kia Soulster could be a car for the times at this month's Detroit motor show. The convertible/pick up combo may look like the result of a Kia Soul, Suzuki Samurai and Tonka dumper truck based recipe but as America ditches its traditionally large 4x4s and utility vehicles, a mini pick up seems right for Motor City.

Whether the Soulster makes production remains to be seen - it's concept car fantasy at the minute - but the standard Soul was in the same position a couple of years ago, and is now on the verge of sales across the world. It's being touted as a Mini rival, and with a unique twist on the small car format such as this, it could have the edge for some people.

You can read more about the cars and stars from the Detroit motor show.