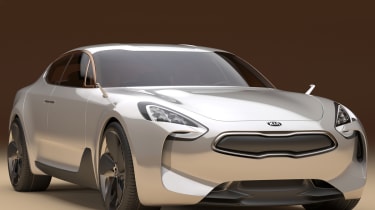 Kia looks set to launch a new coupe and hot hatch in the next few years. Benny Oeyen, Kia’s boss of European product planning, hinted at both a rear-wheel-drive GT coupe and 180bhp Rio GT when evo spoke to him at the 2013 Geneva motor show. ‘We are looking at the GT concept car we showed in Frankfurt in 2011; we are very close to approving that car’, Oeyen confirmed. ‘Our GT will be a little less pure than the Toyota GT86, more of a comfortable cruiser. We have rear-wheel drive platforms in the corporation, including the Genesis coupe. That architecture is quite flexible.’ He also spoke enthusiastically about extending the GT hot hatch line, with the Cee’d’ GT’s 1.6-litre turbo engine being utilised in the Fiesta-sized Rio hatchback. ‘A Rio GT is something that would be very cool. Technically we could do 200bhp but we would be looking at tuning it down so we have a hierarchy! Maybe around 180 would be nice.’ Oeyen also refused to rule out a more powerful version of the recently revealed Cee’d GT hot hatch, which produces 201bhp. ‘There is a reason our new Cee’d is called GT. Our car is not called ‘GTRS’ or something like that, we did not want to create a 295bhp all-wheel-drive monster. We think for our brand at this moment we are not ready for that. On purpose we positioned it as a GT.’ But could a more potent version follow? ‘At this moment not, but I won’t say never.’ It’s all part of a drive to elevate Kia from its current position, a company which sells sensible cars, to one with more emotional appeal. ‘Our cars are very rational but we need to ‘emotionalise’ the brand. Is it a brand you dream about or think is cool? Not yet. It’s something we want to work on and you do that through product’, said Oeyen. One aspect of this is likely to be a production version of the Provo concept, which debuted at Geneva. ‘We will do market research here in Geneva and if the results are as positive as I predict we will have a very good look at that car. We have a flexible B-segment platform (from the Rio) and I think this would be a very good car for Kia, it is very cool. The Mini Cooper Coupe would be its prime rival.’