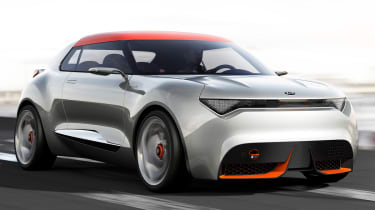 Kia has unveiled its bold Provo concept car, alongside the new Cee’d GT, at the 2013 Geneva motor show.

The coupe-style hatchback combines the GT’s 201bhp, 1.6-litre GDI turbocharged engine with a 44bhp electric motor, the latter powering the rear wheels for additional performance, or in electric-only mode. The car also features a seven-speed DCT transmission, Kia’s first. Helping to put the power down, the Provo's 19in alloy wheels are shod in 225-section tyres.

Inside, the Provo features copious amounts of carbon fibre, helping to keep weight down. There is also a multi-media interface control, which will allow the driver to choose between normal, cruise and track modes, each one displaying different data depending which mode you select.

Kia describes the Provo’s look as ‘road racer’, and it’s certainly a boldly styled car. It hints at a new Kia entry in the B-segment, suggesting a rival for the Nissan Juke. A production iteration would likely use more conventional and less potent powerplants, though this 245bhp four-wheel-drive hybrid version could be an exciting range topper, and a natural Juke Nismo rival.