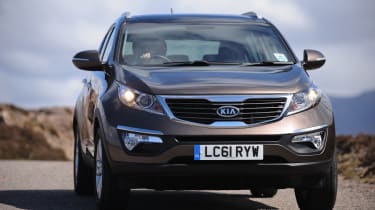 Want a Qashqai, but don’t want to be the same as everyone else? Then the Kia Sportage is worth a look. It’s a bit older than its omnipresent, market-defining rival from Nissan, but sharp looks count in its favour, as does Kia’s impressive - and transferable - seven-year unlimited mileage warranty. There’s loads of equipment as standard too, which is enough for most buyers to put up with the less than class leading drive. The suspension is a bit busy, while the engines only offer average performance, both measured against the clock and in avoiding the pumps and tax. Space inside is good though, the Sportage a practical choice for families, and it should be an inexpensive ownership proposition, too.

The Kia Sportage might be a Qashqai rival, but it’s been around for a while now, and despite some revisions in 2014 it’s a bit behind the latest Nissan when it comes to economy and emissions. The best Qashqai manages a sub-100g/km CO2 output, while the best the Sportage can manage is 135g/km, which means that buyers won't avoid paying annual road tax, and if you’re buying with company money your tax bill will be higher too. That’s an important consideration in this class. Private buyers aren’t likely to be as concerned though, especially as Kia’s customer commitment includes a seven-year warranty, while the option of fixed-price servicing makes ownership an easily budgeted affair, too. Picking one couldn’t be simpler either, Kia badging its trim levels 1, 2, 3 and 4, though the Sportage is offered in both front- and four-wheel drive guises.

The original Kia Sportage was so far removed from this current car it’s scarcely believable that it’s come from the same company. Once a firm focused purely on budget offerings Kia has moved on significantly. It has not forgotten its good-value roots though, so the Sportage offers generous levels of standard equipment at prices that are competitive, too. A mainstream operation now, the Sportage is demonstrative of Kia’s shift to compete head on with Ford, Nissan, Toyota and the likes, with its focus on smart design and good customer service. The Sportage might be getting on a bit now, but that it remains worthy of consideration among its newer rivals underlines just how right Kia got it when the Sportage was introduced. 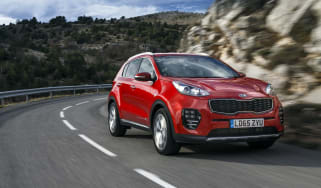 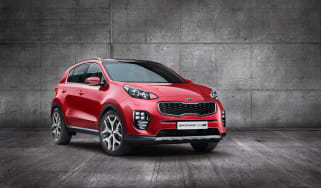