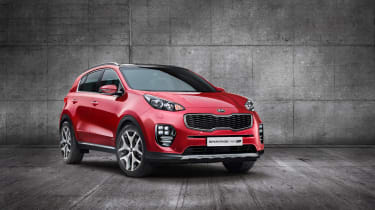 The new 2016 Kia Sportage has been unveiled ahead of its Frankfurt motor show debut on September 15. The Korean firm has now released full details of the car, which continues Kia's presence in one of the most competitive automotive segments.

Penned by Kia’s Frankfurt based European design studio, the 2016 Sportage will be a crucial car for the company as it attempts to increase market share in the highly lucrative crossover segment.

The current generation Kia Sportage shares its platform with the all-new Hyundai Tucson, so you can expect a similar approach to be taken with its replacement model. Key to that are two new engines, joining the existing 1.6-litre petrol and 1.7-litre diesel, carried over from the previous car.

A turbocharged 1.6 T-GDI petrol joins the exisiting non-turbo unit, based on a similar design to that of the Kia Proceed GT. In this application it develops 175bhp, with 195lb ft of torque between 1500-4500rpm. Kia claims keen responses for the unit, which features a higher compression ratio than that of the Proceed GT, along with a single-scroll turbocharger and electronic wastegate actuator.

The diesel meanwhile provides a higher-output option than the existing 1.7 CRDi's 113bhp. 2.0 litres in capacity, it's available in 134bhp and 181bhp outputs, with 275lb ft and 295lb ft of torque respectively. Kia says the unit is quieter than its previous diesels, with greater sound deadening and lower friction the contributing factors.

Six-speed manual and automatic transmissions remain available, but they're joined by a new seven-speed dual-clutch gearbox. An option on the 1.6 T-GDI, it's been developed in-house by Kia. Both front-wheel drive and all-wheel drive options are offered, depending on the model. 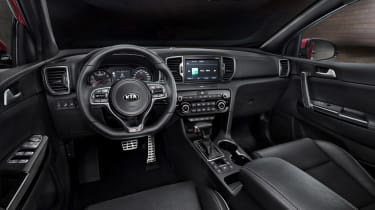 Judging from Kia’s pictures, the new Sportage will build on the shift in design laid out by the Proceed GT. That means twin-exit exhausts, a roof spoiler and redesigned taillights. New look LED daytime running lights as well as a redesigned front grille also make an appearance.

The previous generation Sportage might have enjoyed sales success, but it failed to impress us with lacklustre engines, plenty of roll and low levels of feedback. Kia claims it's improved the drive too, introducing greater agility and a more pliant ride. It still features fully independent suspension all-round, but geometry changes, revised dampers and stiffer wheel bearings and bushes have the potential to make the Sportage a sharper drive.

The electronic power assistance motor also moves to the rack, from the column, which is typically a route to greater feel through the wheel rim. Larger brake discs and different pads should reduce stopping distances, too.

Seen here in GT Line trim - with 19in alloy wheels and distinctive 'ice cube' daytime running lights like those of the Ceed GT - Kia will also offer the car in its usual trim lines, with wheel options from 16- to 19-inch. The new styling features cleave the air better than before, too, as the car's drag coefficient drops from 0.35 to 0.33.

Pricing is yet to be announced, but should be revealed closer to the car's launch in the first quarter of 2016. You can read more from the Frankfurt motor show at our dedicated show hub.