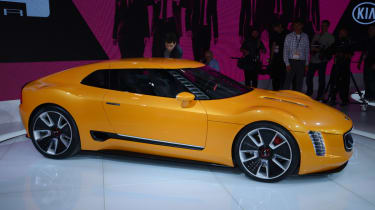 Kia has fully unveiled a new GT86-rivalling sports car concept, called the GT4 Stinger, at the Detroit motor show. The concept was designed at the company’s Californian design studio.

Powered by a 2.0-litre turbocharged four-cylinder engine, the Stinger produces 315bhp. Not only this, but Kia has also confirmed that the model will be rear-wheel drive with a close-ratio six-speed manual gearbox.

Kia’s chief US designer Tom Kearns commented: ‘Driving enjoyment was the number one priority in designing the GT4 Stinger. It’s a 2+2 sports car that can turn heads as a daily driver while also being right at home on the track.  It’s about purity, simplicity and timelessness.’

Designed to appeal to the American market, the concept points towards a possible future model in the USA, although Kia has not confirmed GT4 Stinger model yet. The company has however confirmed that the introduction of the Stinger pushes the company’s future designs in a new direction.

The distinctive front end gets a new version of Kia’s ‘tiger nose’ grille, which glows white, with two sets of futuristic-looking LED headlight clusters on each side. It sits on a set of 20-inch alloy wheels, wearing 235/35R20 Pirelli P-Zero tyres at the front, and wider 275/35R20 on the back.

Inside the Stinger shows off its track car pretentions with no carpets and sports seats. Kia has introduced a new innovation to the GT4, called ‘transparent a-pillars’, allowing 270-degree unimpeded view from the drivers seat. 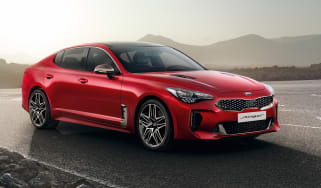