The KTM X-Bow sports car is set to gain the 2.5-litre five-cylinder engine from the Audi RS3 and TT RS 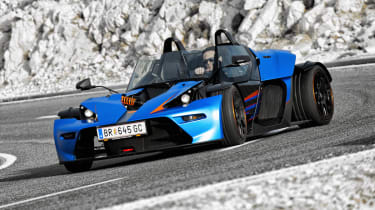 The KTM X-Bow sports car looks set to gain the 2.5-litre five-cylinder turbocharged engine from the Audi RS3 and TT RS. The carbon tub-equipped track special has so far used four-cylinder turbo engines from the Volkswagen Audi Group with a 295bhp peak. It is currently being tested with the more powerful and sonorous five-pot unit, which makes 335bhp in its coupe and hot hatchback applications. KTM CEO Stefan Pierer revealed the news to evo at the 2013 Geneva motor show. ‘Audi is offering us the five-cylinder engine platform. In race usage we’ve already been thinking about a stronger engine. This one sounds good and performance-wise, you can get up to 480hp.  ‘We are running the first prototypes and you may see it within the next year in some specific races. That five-cylinder engine is very compact and fits perfectly in our chassis with a little extra wheelbase. We have some prototypes with a twin-clutch gearbox, too.’ KTM’s race and road cars are incredibly similar, so if the five-cylinder X-Bow gets the production green light, a road-going version would be nigh on certain. Pierer also discussed how important the new X-Bow GT – which gets a windscreen, side windows and an optional soft-top and luggage section – is to the company. ‘The windshield is important to attract a different customer group, those put off by the need to wear a helmet. You can drive it like a regular cabriolet.’ The GT version is expected to make up around 70 per cent of X-Bow sales, with KTM planning for a minimum of 100 car sales in 2013, with a potential for up to 200.

evo's video live from the KTM stand at Geneva below