When Roger Green had the chance to share a race in a Gallardo with a Le Mans-winning legend, he couldn't think of a better car to drive to the circuit in than the new LP550-2 Balboni 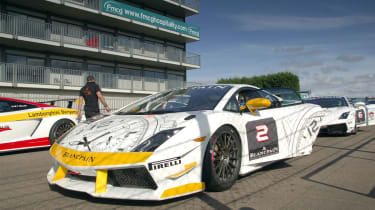 As far as my body is concerned, Saturdays contain only one 6 o’clock, and it coincides with tea and the early evening news. I don’t normally leap energetically out of bed the instant my alarm clock fires off a round of electronic beeps while a ‘6’ flashes alongside the letters ‘a’ and ‘m’, but then I don’t normally draw back the curtains to find a Lamborghini Gallardo LP550-2 Balboni sitting outside either. The Gallardo doesn’t have a bad side, but I’d argue that it’s best viewed from above. From here its perfect proportions, angular, attacking lines and glass-topped 5.2-litre engine can all be admired together, the Balboni’s white and gold stripe adding further drama. It’s enough to kick-start the pulse of the sleepiest petrolhead. Good job too, for there’s no time to waste – today I’m heading to Silverstone for a brief dip into the glitzy world of the multi-millionaire gentleman racer. There’s no quiet way to start a Lambo. They always bark gloriously (or should that be gratuitously?) into life with a flare of revs loud enough to scare birds into flight and wake entire sleeping villages. I usually try to get on well with my neighbours, but needs must and after treating them to Italy’s finest V10 dawn chorus, I slip away into the unsuspecting countryside. The plan is simple: drive to Buckingham, pick up my professional co-driver, then share the drive to Silverstone where we’ll compete in rounds 10, 11 and 12 of the Blancpain Lamborghini Super Trofeo championship, the fastest and most glitzy one-make series in the world. It’s not far from my house to Buckingham, but no one said I had to take the direct route, and at this time in the morning, with the roads deserted, it would be criminal not to exploit the opportunity to the full. It only takes a few miles for me to realise that the LP550-2 is the car the Gallardo should have been from the outset. On the insistence of Valentino Balboni, Lamborghini’s former chief test driver and the man after whom this limited edition run of just 250 cars is named, the 550-2 does away with the over sophistication of all-wheel drive and the flappy-paddle e-gear transmission. The result is a 30kg reduction in weight, a chassis unshackled from the extra diff and a sweet open-gate gearbox that rewards anyone who can work their left-sided limbs in unison. It instantly feels freer, more involving, faster and more exciting than any Gallardo before. It’s a raucous, intense, challenging drivers’ car, a supercar to its core. Most importantly of all, it’s a car worthy of the great man’s name. Why the engine has ten fewer horses than the 560-4 I’m not sure (it’s got 542bhp instead of 552), but you don’t miss them. On a give-and-take road the Balboni feels noticeably faster, probably due to the heightened sensations, especially with the electronic aids switched out. Traction is still impressively strong, but with almost 400lb ft of torque working the rear Pirellis they can easily be overloaded. There’s predictability and progression up to a point – a degree or two of opposite lock can be held without inducing sweaty palms – but getting greedy with the throttle is akin to playing with the devil. Your whole world could snap away in a heartbeat. That said, it’s not edgy or scary like, say, a Corvette ZR1 – the chassis and steering detail ground-level interaction. Instead it urges you on while demanding your fullest concentration, much like a 911 GT3. And the satisfaction that comes from stringing a series of bends together is on the same exalted level.

‘As we get close to the end of the season I feel a responsibility to continue to do well for my teammate, but whatever happens I’m definitely going to stay in the series next year. In fact I’m trying to persuade some friends to take part too.’

Eugenio Amos, 24, Real estate investorAmos may be one of the youngest drivers on the grid, but that doesn’t mean he lacks sportscar race experience. Last year he competed in the Italian GT Championship, and this season as well as lying fifth in the Super Trofeo standings he also competes in the Ferrari Challenge.

‘I like the cars very much and there’s a great ambience in the paddock,’ he says when ask what drew him to the series. ‘The circuits are special too. Spa was unbelievable in these cars.’