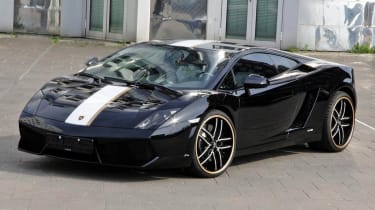 Thought the pretty sublime Lamborghini Gallardo LP550-2 Valentino Balboni couldn’t get any better? Tuner Anderson Germany begs to differ. Hailing from Deutschland (as you may have guessed), Anderson’s Balboni makeover is likely to be a controversial one. It has taken the white and gold theme exhibited by the standard LP550-2 and extended it beyond body stripes and minimal interior garnishing.  While those stripes remain intact, the interior has become excessively white, with quilted leather and a questionable steering wheel insert. It’s certain to stir opinion; the LP550-2 is a celebration of outgoing Lamborghini test driver Valentino Balboni, don’t forget, and Anderson has meddled with its design and removed a layer or two of subtlety. Anderson describes those seats as ‘an absolute feast for the eyes’, but it’s one some may have trouble digesting. Exterior changes amount to tinted rear lights and some lacquered 20in alloys, which boast a much more intricate design than normal and also mirror the car’s white and gold theme. They come wrapped in fat performance tyres, measuring 235/30 front and 305/25 rear. Performance tweaks amount to a power hike – from 542bhp to 581bhp – and the fitment of a sports exhaust, which has a remote-controlled, three step valve control. If you’ve been won over by the rest of the car, though, you’re likely to only ever use the loudest level… Contact Anderson Germany if you’d like to know more – official site here – where you can also get acquainted with its other modified metal, including a Ferrari 430 Scuderia, Bentley Brooklands, Audi R8, Porsche 911 ‘Speedster’ and a BMW M5.

Video, review and full picture gallery of the LP550-2