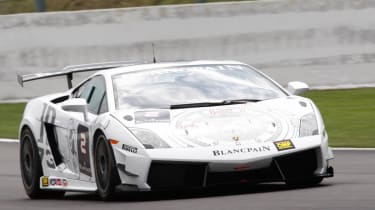 With the Lamborghini Gallardo approaching the end of its model cycle, reports suggest it will be given a fitting last hurrah before the mooted Cabrera is unveiled. It is reported that Lamborghini will unveil a final fire-breathing version of its Gallardo model at next month’s Frankfurt motor show, a new ‘super sports car’ (Lamborghini’s words) potentially based on the Gallardo Super Trofeo racing car. We race one (and crash one) on video here. Production would likely be limited to just 30 examples of the stripped out Gallardo. A weight of around 1300kg is predicted, 110kg lighter than a standard LP560-4 and 40kg lighter than a Gallardo Superleggera. The engine is reported to be a tuned version of Lamborghini’s 5.2-litre V10, though the racing car produces the same 562bhp as the Superleggera and Performante. The car would also be likely to get a large rear wing and low-slung front splitter. A 0-62mph sprint of around 3sec and 210mph top speed have been suggested. With a price tag of around £200,000 – around £20K more than a LP570-4 Gallardo Superleggera, but nearly £50K less than the new LP700-4 Aventador – the final Gallardo should be the fastest, most extreme version yet.

Video of us racing (and crashing!) in the Super Trofeo series