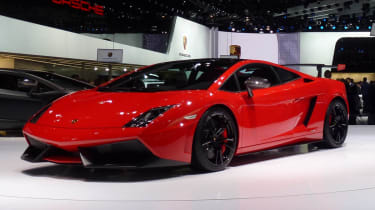 Lamborghini has unveiled yet another special edition, and the most extreme version of the Gallardo to date - the LP570-4 Super Trofeo Stradale. It's been built, as the name suggests, to highlight the connection to Lamborghini’s Blancpain Super Trofeo one-make race series. This connection has been evoked previously, with 2010’s LP570-4 Blancpain Edition. Although we could end up eating our words in a few months, this looks to be the last in the line of the Gallardo before a new baby Lambo comes along.

There's a carbonfibre engine cover which features the quick-release system from the race car and lightweight 19in alloy wheels unique to the Stradale, wearing Pirelli P Zero Corsa tyres.  That huge rear wing is also from the race car and is claimed to double downforce over the LP570-4 Superleggera.

It has the same 562bhp 5.2-litre V10 as the Superleggera and the claimed kerb weight of 1340kg is identical (saving 70kg over a standard LP560-4). A 0-62mph time of 3.4sec is also identical to the Superleggera's, but top speed is reduced from 202mph to 193mph presumably owing to the drag generated by the wing.  It also gains the Superleggera’s e-Gear six-speed paddle-shift transmission. Unlike the Blancpain edition however, carbon-ceramic brakes will feature as an option rather than standard fit.

That striking red paint is called ‘Rosso Mars’ and is said to symbolise Italy’s traditional racing colour. The interior is a combination of Alcantara and carbonfibre, the former covering the dash and including a stitched Super Trofeo Stradale logo

Only 150 Super Trofeo Stradale’s will be produced and like the Blancpain edition, expect to pay over £200,000.