Lamborghini pulls the wraps off its new rear-wheel drive supercar at the LA motor show. Meet the Gallardo LP550-2 Spyder 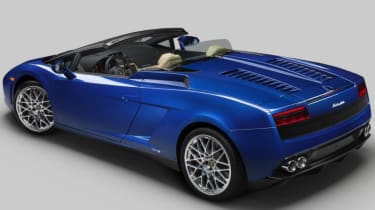 Lamborghini has unveiled a new rear-wheel-drive supercar. Following 2009’s limited-run Gallardo LP550-2 Valentino Balboni, named after the company’s legendary test driver, there’s now a Gallardo LP550-2 Spyder. It’s the first rear-driven Lambo convertible since the Diablo SV Roadster of the late 1990s. It uses the same 542bhp/398lb ft 5.2-litre V10 engine as the Balboni, itself a very slightly detuned version of the V10 engine that powers all Gallardos up to the range-topping (but four-wheel drive) Superleggera and Performante. The power is transmitted to the rear wheels via a six-speed E-gear automated manual gearbox, its paddleshift gearchange aiding a 4.2sec 0-60mph sprint. The top speed is 198mph, a whole 1mph short of a coupe LP550-2. There have been a number of modifications to accommodate the new drive layout, with different damper settings and revised aerodynamics. The weight distribution now stands at a near perfect 47/53 front/rear ratio; impressive considering the engine and driveshafts all sit towards the back of the car. The Gallardo LP550-2 Spyder was unveiled at a private event held alongside the 2011 LA motor show. No firm release dates or prices are yet available, but expect to be able to pick one up by next summer with a list price of £158,797 in the UK - £3500 less than an all-wheel-drive LP560-4 soft-top.