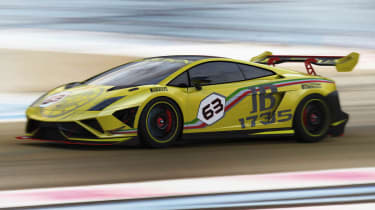 In line with the facelift of the road-going Gallardo, which was unveiled at the Paris motor show, Lamborghini has unveiled a new LP 570-4 Super Trofeo racing car.

Based on the track-proven chassis of the previous generation racer, the new-look Super Trofeo receives the same styling tweaks as the new road car. The biggest change to affect the racer’s on-track performance is a new aerodynamic kit, which includes a new ten-way adjustable wing. The changes all add up to in improvement of 120 percent over the 2012 car.

Overall downforce has been increased by up to 160kg, and with new brake cooling ducts Lamborghini has managed to increase thermal efficiency by 50 percent.

During the launch of the new car, Lamborghini also commented on the future of the Super Trofeo series, and has confirmed that for 2013 – the company’s 50th anniversary – the Super Trofeo will be returning to Europe and Asia, as well as plans to take the series to the USA.

Maurizio Reggiani, Head of Lamborghini Motorsport, commented: ‘We believe that it is important to evolve the car, while ensuring Super Trofeo remains an attractive series in which to compete.’