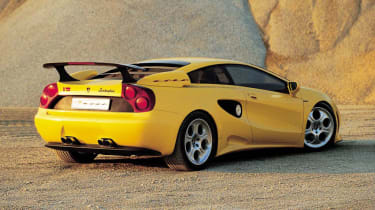 Lamborghini’s 50th birthday road trip will boast a surprise attendee. The Cala concept car previewed a small Lambo in the mid-1990s, and despite never making it past the 1995 Geneva motor show it was fully functional.

And the great news is it will be driven the 692-mile route that will see 300 Lamborghinis and their owners travel from Milan to Sant’Agata in May. Powered by a 400bhp, 3.9-litre V10, the Cala is rear-wheel drive – testament to its creation before Lamborghini’s all-wheel-drive era under Audi. It never made production, the Gallardo – also with a V10, albeit a much more potent, 493bhp 5-litre – becoming the baby Lamborghini in 2003.

The Cala was penned by Italdesign Giugiaro and is a much more complex piece of design than Luc Donckerwolke’s Gallardo, with a wonderfully over-the-top meeting of windscreen and roof, a fixed rear spoiler and some bold side air vents. There’s also a set of chrome alloy wheels and a very intriguing air scoop on the rear flank.

With five days of touring through Italy, the Cala – which has an estimated 181mph top speed – should get plenty of opportunity to flex its muscle and prove it should have battled the Ferrari F355 and 360 Modena before the Gallardo had its shot on the F430.