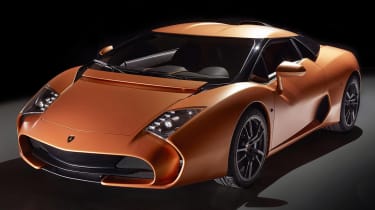 A special one-off Zagato was revealed at this weekend’s Villa d'Este Concours in Italy. Created in partnership with the Italian company, the Lamborghini 5-95 Zagato celebrates the Italian coachbuilder’s 95th anniversary.

Based on the underpinnings of a Gallardo LP570-4, Zagato’s creation was commissioned by collector Albert Spiess, a man already lucky enough to own several Lamborghinis and Zagatos including a 2012 Aston Martin V12 Zagato.

To commemorate its birthday, Zagato’s 5-95 flaunts features from cars of its past including a wraparound windscreen, double-bubble roof, floating front spoiler and small side intakes. The headlights clearly mimic modern Lamborghinis, though the usual three part front grill of the Gallardo has been replaced by a wide, two stepped opening.

Zagato worked hard to lengthen the appearance of the car’s nose, by pulling the rear of the body as close as possible to the engine, adjusting the overall proportions. This is accompanied by a floating roof, created by colouring the pillars black to contrast the matt-orange of the body.

At the back, quad exhausts poke out of the bumper, whilst large protruding rear lights extend out of a dominating rear grille. Behind this sits the same 562bhp 5.2-litre V10 that you’d find in a normal LP570-4, enabling the four-wheel drive Zagato to sprint from 0-60 in about 3.5secs and onto to a top speed of over 200mph.

Sadly however, the 5-95 is set to remain as a one off, taking up residence as a ‘fundamental piece’ of Spiess’ private collection.