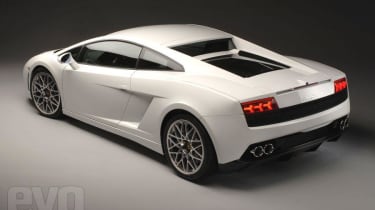 Lamborghini's faster, more powerful, 560bhp Gallardo, called LP560-4, doesn't just have a bigger 5.2-litre capacity and direct fuel injection. The entire engine is new. 'The old engine was at the limit of its power and capacity,' said technical director Maurizio Reggiani at Geneva. 'So we've used stratified direct injection to increase power, because it allows a higher compression ratio – up from 11.5 to 12.5 to one – and it improves efficiency, with CO2 reduced by 10 per cent. 'We also needed to increase the cylinder bore, which meant a new block with wider bore centres. And that meant we had to have a new, longer crankshaft.' Previously the crankshaft had split crankpins for opposite cylinders, to give even 72deg firing intervals with the 90deg vee-angle Lamborghini deems necessary to keep the centre of gravity low. The crankshaft design wasn't very rigid, though, causing vibration that the even firing intervals were meant to stop. This time, opposite cylinders share a common crankpin, like those of a typical V8, which means the firing intervals are either 90deg or 58deg apart. Combine that with a exhaust manifolds which, on each bank, have three-into-one, two-into-one and a single pipe joining the two-into-one downstream, and you have the recipe for a wholly different Gallardo sound. But does the new engine vibrate more? 'No,' says Reggiani, 'because the stiffer crankshaft makes up for the uneven firing.' A brief burst of action from the LP560-4 at a pre-show demo was accompanied by an almost Formula One-like explosion of noise, which was very promising.