The Lamborghini Pregunta concept car was based on the V12 Diablo, and is for sale now. Video and pictures here 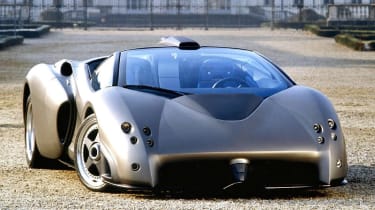 Pregunta perhaps isn’t one of the most famous raging bulls, but it’s a title that may appeal to some Lamborghini fans. The Pregunta is one of the last models Lamborghini made before the VW group took over, and now it’s up for sale for 1.6million euros (or about £1.4million) through a French exotic car dealer.  The Pregunta was based on the underpinnings of the rear-wheel-drive Diablo, being propelled by the same 530bhp V12 with the top speed a claimed 207mph and a 3.9sec 0-62 time. The concept made its first public appearance in 1998 Paris Motor Show. Clearly inspired by the aerospace industry, the Pregunta is painted in the same colour as the Dassault Rafale fighter jet and is typical concept car, using cameras instead of side mirrors and optical fibre lighting in the interior, while carbonfibre was used in its structure. French company Carrosserie Heuliez carried out the production of the car.

A very Top Gun video of the Lamborghini Pregunta is below...