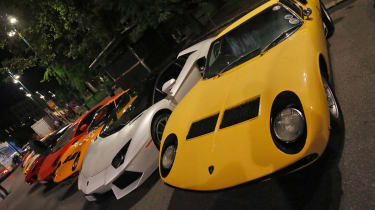 The Lamborghini 50th Anniversary Grand Tour has started. It will see 350 Lambos travel in convoy from Piazza Castello in Milan to Lamborghini’s Sant’Agata factory, via Rome and Bologna.

The 190,000bhp cavalcade celebrates the Italian supercar maker’s half century in rather grand style, with each Lambo represented. There’s one LM 002, 21 Diablos and 36 Murcielagos, for instance, while the two cars owned by evo’s Harry Metcalfe are among the eight Espadas and 15 Countachs taking part.

A larger Lamborghini Grand Tour report will follow on evo.co.uk, but as the tour heads off, enjoy these pictures (click to enlarge them) from its beginning in Milan.