Lamborghini has revealed a new anniversary model - called the Egoista - at the end of the three-day Jubilee Tour. details and pictures here 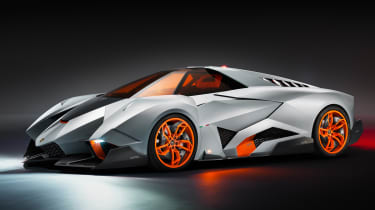 Lamborghini’s Stephan Winkelmann provided a dramatic end to the three-day anniversary tour, with the introduction of the one-off Lamborghini Egoista – a 50th birthday present from head of VW Group design Walter De Silva.

The single-seater is powered by a 592bhp 5.2-litre V10 engine, and the styling is said to be inspired by the Apache helicopter. The cockpit has the ability to separate in an emergency, and is built from carbon fibre and aluminium to act as a safety cell.

In side profile, De Silva says the Egoisa has been styled to look like a charging bull, with its horns lowered – paying tribute to the company’s raging bull logo. Unlike the recent Veneno, the Egoista doesn’t use spoilers, but active flaps.

Inside, the cockpit is very functional with the minimum amount of gauges and distractions, four-point racing harness, and of course a single seat. Continuing the jet-fighter theme, there is also a head-up-display.

Lamborghini has gone a step further than the ultra-exclusive Aventador J or Veneno, and has declared the Egoista a present for itself. One that nobody will ever own or drive.