Driving his Countach on the amazing three-day Lamborghini 50th anniversary tour, evo's Harry Metcalfe takes us along for the ride. Video diary here 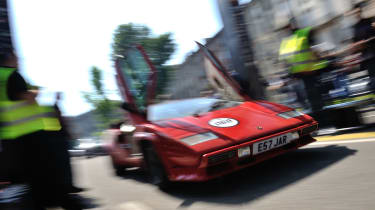 evo boss Harry Metcalfe was one of the 350 Lamborghini owners to take part in the 50th anniversary tour, which took place in Italy from 8-11 May, following a 745 mile route from Piazza Castello in Milan to Lamborghini’s Sant’Agata factory, via Rome and Bologna.

In this video Harry takes us along for the trip in his usual evo Diaries style, while driving his 1988 Lamborghini Countach 5000 QV. Watch the video below, and catch up with Harry's Lamborghini V12 timeline video, which was also filmed during the tour, here.

Find a Lamborghini through evo Cars for Sale