No shape says supercar more clearly, but the Lamborghini Countach was also a great drive 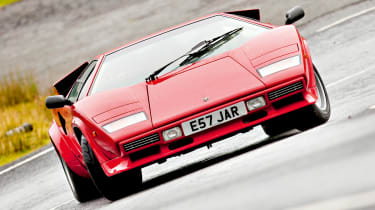 Mention the word ‘supercar’ to anyone with even a vague interest in the subject and even if the word doesn’t immediately slip into the conversation, the image that will flicker into focus like a Derren Brown mind-plant will almost certainly be that of the Lamborghini Countach. As it was at its launch in 1974, it remains the shape that defines the genre, though by the time the horribly over-embellished valedictory Anniversary edition appeared in 1990, Lamborghini had perhaps forgotten how outrageously perfect the unadorned original design was.

Indeed, it was conceived as a styling exercise, then adapted for use on the public highway – but its genesis was hijacked (thankfully) by people with an obsession for high performance and, for better or worse, motorsport. Its tubular steel chassis was delicate but light and strong, as was the alloy body. The questionable space-efficiency of the Miura’s transverse motor was ditched in favour of a longitudinal orientation for the V12 and from each corner hung a pair of wishbones. By the time it had morphed into the best version of all, the Quattrovalvole, it had grown taller but become more habitable too, allowing grown adults to sit upright in the cabin.