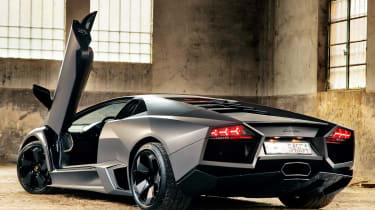 How do you turn a Murciélago LP640 into something more extreme? Perhaps more to the point, why would you want to? Chances are, you wouldn’t. But Lamborghini reckoned there had to be a least 20 people with a no-limit credit card who would. So it made the million-euro Reventón just for them – the most expensive and extreme roadgoing Lambo of them all. Not so much a Veyron-chaser, but rather ‘a symbol of extreme exclusivity’.

The design took much of its inspiration from America’s F-22 Raptor fighter-jet with its simple, angular shape, sharp edges and distinctive nose-forward canopy. Exported to the four-wheeled realm, this translated into a more technical and edgy looking Murciélago with interrupted lines and contorted panels to create a more dynamic play of light across its surfaces. The aerospace overtones accounted for the only offered paint finish as well. Grey Barra was described as a ‘mid-opaque grey without the usual shine’. Matt, in other words.

Inside, the dash had no dials, only three TFT liquid crystal displays. There was even a G-Force meter that represented dynamic driving forces, depending on the direction and intensity of the acceleration.

The Reventón drove pretty much exactly like a standard LP640, which was entirely to be expected because, under the skin, that’s exactly what it was.