evo takes a look at the increasingly popular top speed events, such as the VMax 200 at Bruntingthorpe. Video and pictures here 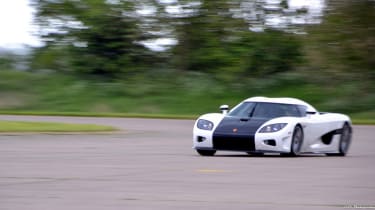 For those lucky enough to own a supercar, finding a place to attempt to legally reach top speed is often impossible outside of the Autobahns of Germany. But luckily for UK supercar owners, a fast growing top speed members club, VMax 200, organises events where speeds of over 200mph can be reached in a safe and controlled environment.

Armed with a Lamborghini Aventador, loaned to us by Auto Vivendi, we took to Bruntingthorpe Proving Ground to see how our Italian supercar would fare against some of the regulars of the top speed club.

With 691bhp available to drive all four wheels, the 6.5-litre V12 Avantador can reach a top speed of 217mph when given room to do so. But with runway length being a limiting factor, our attempts saw us reach a verified 204mph. Even so, despite comfortably passing the illustrious 200mph mark, the Verde Ithaca Lamborghini was far from topping the speed trap board.

That’s because racing driver Oliver Webb was able to take the day’s crown with a top speed of 211mph in a white Keonigsegg CCX, the 806bhp 4.7 twin-supercharged V8 supercar running out of runway before it could reach its listed top speed of 241mph.

Other stars of the day included a Nine Excellence 911 GT2 that topped out at 210mph, whilst a McLaren P1 reached 209mph and a rare Ruf GTR3 reached 207mph. That’s not to say the day was all about topping the results however, because many supercar owners took part simply for fun, as well as the chance to legally stretch the legs of their exotic machinery.

Watch the video above to ride onboard our snarling V12 Aventador and the mighty Keonigsegg CCX as they power past 200mph on their impressive top speed runs.