A brush with the police revealed not everyone adored supercars 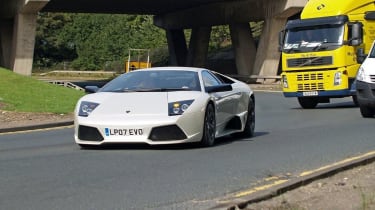 It had to happen sometime I suppose. Blatting north up a near-deserted M1 one Sunday morning recently, I was too busy chatting to LP07’s co-owner to notice the plain blue Volvo cruising in the inside lane. Fortunately for me I wasn’t in the Lambo’s driving seat at the time, but the air turned the same colour as the Volvo driver’s uniform when it appeared in our mirrors with its strobes flickering.

We couldn’t really argue with getting a ticket for 91mph in a 70, but we were both taken aback by the ensuing tirade about how ‘cars like this shouldn’t be allowed on the road’. My response that the Italian Polizia Stradale run a couple of Gallardos as pursuit vehicles only seemed to make things worse. It was a very strange encounter to say the least, especially as every other cop that has tugged either the LP640 or my previous Murciélago long-termer has had quite the opposite attitude. Still, not everyone loves supercars (just ask my neighbours).

Actually, it’s not been the best of months for LP07. Shortly after that episode I was reversing into the garage and forgot to hit the button to fold those huge wing mirrors in. The result was predictable – a cracking sound and a pile of expensive pieces of plastic that had me almost crying in frustration.

As a temporary measure I’ve managed to superglue the broken mirror housing back together, albeit looking somewhat like a terrier’s breakfast, but as I’m unlikely to find an LP640 door mirror at the local scrapyard I’ve had to bite the bullet and fork out for a new replacement – a mere £1400…

But apart from that, the Lambo is coping extremely well with its increasingly big mileage and hard life. Watching LP07 earn its keep at Elvington Airfield recently, instructors caning it continuously for over six hours and pausing only to refuel and change drivers, reminded me again of how durable modern Italian supercars are. I somehow doubt that anything that emerged from either Sant’Agata or Maranello as recently as just ten years ago would fare quite so well…