In rallying form it won five WRC manufacturer titles; in showroom trim it remains one of the best road cars ever made. But buy with care... 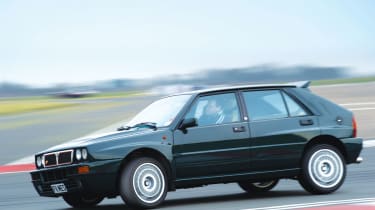 The passage of time can turn heroes into has-beens. Not so the Lancia Delta HF Integrale. Even today, almost 24 years after the original 8-valve Integrale was launched, you can storm along in the company of modern high-performance machinery and not have to make many excuses regarding the four-wheel-drive Lancia’s age. Sure, it may not erupt out of corners with the savage rage of a Mitsubishi Evo FQ-400 or Nissan GT-R, but – in the later editions especially – the speed you carry into a corner can be maintained and used to rocket you out the other side.

Though more than capable of blinding speed across challenging roads and in dire conditions, the Integrale’s other attributes are what have helped it endure – and remain adored. Its wonderfully neutral chassis balance and agility. Its intimate steering feel. The whoosh and chuff of its turbocharger as it stokes the seductive-sounding 2-litre twin-cam four-cylinder engine. Not to mention the Integrale’s looks: beefily broad, broodingly hard-faced. As an overall package it’s deeply charismatic, which partly explains why values continue to remain strong.

It helps that the Integrale has motorsport heritage. A towering pile of the stuff, most of it podium-topping. When Group B rally cars were legislated out of the World Rally Championship at the end of the 1986 season, Lancia needed a production-based alternative to tackle Group A. Key technologies from the Delta S4 Group B, namely four-wheel drive and turbocharging, were then applied to the narrow-bodied Delta HF 4WD to create a very short-lived (yet able) road car and, for 1987, a WRC championship-winning rally car.

As rivals struggled to catch up for the 1988 season, Lancia widened the Delta’s track and wheelarches and produced the Integrale. And from then until the end of 1992, the Delta Integrale and its evolutions owned the WRC, taking consecutive manufacturers’ crowns during this period. It cleaned up in many European national championships, too, becoming what’s often claimed to be the most successful rally car of all time.

Because of the much closer relationship between competition cars and road-going equivalents than is enjoyed these days, the upgrades required for the stages were also applied to the showroom models. Well, to a degree… The wide-arched 182bhp Integrale 8-valve replaced the HF 4WD in late ’87; within 18 months it gained a new engine with twice the number of valves and 197bhp. Together with wider wheels, bigger brakes and a torque split that favoured the rear wheels, this was the Integrale 16v.

In October 1991 the Evoluzione arrived, with an even wider track, new front suspension and a revised rear set-up. This demanded fatter wheelarches, and the Integrale looked more stunning than ever. A remap resulted in 207bhp, while the interior got a Momo wheel and Alcantara upholstery.

What we now call the Evo II rocked up in June 1993. In reality it was an Evoluzione with a cat, plus a new turbocharger that helped raise power to 212bhp to counter the effects of the exhaust cleanser. It also got 16in alloys, up from 15s. A number of special editions, which were nothing more than different paint colours and some stickers, followed before the Integrale was phased out in 1994.

Although all four-wheel-drive Deltas are fun, the pick of the bunch is the Evo II. Last-of-the-line models aren’t always the best, but this one is. And it has an added benefit: from the outset it was clear that the Evo II would be a legend, and most owners have cared for them accordingly – a fact that is, of course, reflected in the prices…

John Maxwell - For John it was quite a step up from a mk2 Cavalier to an 8-valve Integrale, both in terms of performance and running costs – during six and a half years of ownership he spent £13,500, and although he has now sold the car, he’s currently on the hunt for an Evo II.

‘Many moons ago I saw an Integrale 8-valve buying guide, which sparked my interest. I test-drove several before settling on a 66,000-mile 1989 model.

‘It was a real pleasure to own, despite all the problems. The back section of the exhaust was the first thing to go, prompting a Scorpion replacement for £500. The big-end shells failing caused the first engine rebuild, and the crankshaft was responsible for the second. And for a while it would pop out of fifth gear.

‘It was blinding on back roads, though, which may explain why the tyres only ever lasted 12-16,000 miles…‘The Integrale gave me some cherished memories: I’ve really got to find another one.’