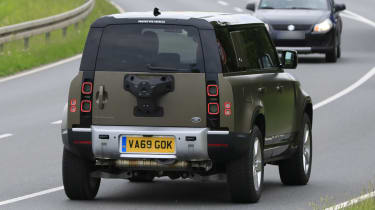 The new Land Rover Defender was revealed to much fanfare earlier this year with a range of four- and six-cylinder petrol and diesel engines powering the big off-roader. Land Rover isn’t stopping there though, with fresh images of a Defender prototype hiding away a big new muffler and quad exhaust outlets, pointing towards the release of a new flagship V8 model.

The engine itself will be JLR’s 5-litre supercharged V8, despite nearing the end of its lifespan in the UK and Europe due to tightening emissions regulations. These regulations don’t exist in the Defender V8’s biggest projected markets such as the USA and the Middle East though, meaning that while the Defender V8 might have a limited shelf-life locally, its sales potential elsewhere will likely be largely unaffected in the model’s later life cycle.

We can only speculate how much power the Defender V8 will generate, but it will likely sit below the high-spec SVO applications of 564bhp and 542bhp from the Range Rover Sport SVR and F-Pace SVR, closer instead to the 510bhp mark as found in lesser V8 Range Rovers. An application of the 444bhp V8 from the mid-range F-Type is also unlikely, due to its close proximity to the mild-hybrid, inline-six 394bhp P400 variant that currently tops the range. 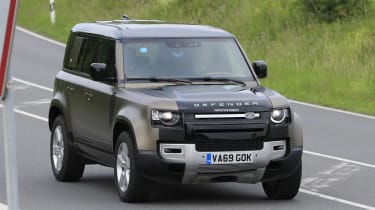 Although the likelihood of a high performance G63-rivalling Defender from JLR’s SVO task force is a likely future addition to the range, this prototype’s obvious lack of chassis upgrades such as bigger brakes, wheel and tyre packages or obvious styling changes point to this prototype as a more rudimentary engine variant, rather than separate model. Also joining the Defender V8 range will be a plug-in hybrid to help cancel out the V8’s less than squeaky clean image.

Land Rover has remained coy about when we’re to expect the new V8 Defender, but with a priority to get fuel-sipping models on sale before the end of 2021 to comply with the incoming fleet average emissions targets, it remains to be seen when exactly the V8 Defender will arrive. With pricing of the current Defender 110 P400 X already pushing £90k with a few option boxes ticked, we’d expect a starting price of somewhere close to £100k for this flagship V8 when it eventually arrives.