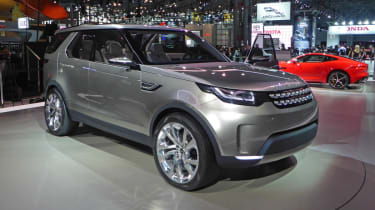 The Land Rover Discovery Vision concept has made its world debut at the 2014 New York motor show. It previews the next-generation Discovery, and introduces the idea of a new Discovery family, rather than a single model.

Driven by a decidedly tech-heavy arsenal of electronic systems and off-road aids, the Discovery Vision concept is brimming with next-generation features. Smart glass has been used, meaning that augmented reality can be used to aid off-road driving, tight maneuvering as well as adding gesture control for various functions, including the indicators and lights. There is also the new ‘transparent bonnet’ option, which projects an image of the terrain below the vehicle onto the glass, which gives the impression of a translucent bonnet.

Like the big German manufacturers, Land Rover is experimenting with laser technology for the next-generation active headlights. One of the most interesting and potentially useful features is the ability to remotely control the car via an app, James Bond style. The idea is that you can maneuver the car in extreme off-road situations, or when hitching up a trailer at very low speed.

Inside, the concept features washable Foglizzo leather seats, as well as wood veneer on the floors and instrument cluster. The seven-seater model also has electrically-controlled seat folding mechanisms, which allows the driver to select many different configurations – including a four-seat ‘limousine’ mode – at the touch of a touchscreen button.