Range Rover tuning company Overfinch, has unveiled the limited edition £147,500 GTS-X, its most powerful Sport ever. 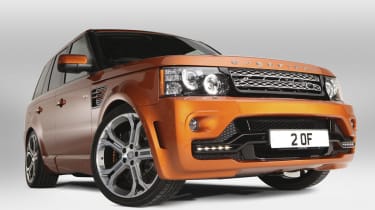 Overfinch has just launched its latest and most powerful version of the Range Rover Sport, the 575bhp GTS-X. It is power by an uprated version of the 5.0-litre supercharged V8 - costing £147,500.

The GTS-X will do 0-60mph in 5.0 seconds - almost a second faster than the standard Supercharged Sport - and will power onto a top speed of 145mph.

Part of the Overfinch upgrade package is the electronic lowering module, which adjusts the suspension springing and damping rates for greater stability. It is fitted with unique 22-inch Titan forged alloy wheels, and upgraded Brembo 380mm drilled and vented brake discs.

The interior has been fully re-trimmed in Nappa leather, with lots of carbon fibre detailing - including the gear-shift paddles.

Overfinch made its name by creating some monstrously powerful Range Rover conversions in the late '80s - done by removing the standard Rover V8 and fitting a small-block Chevrolet V8.

This tradition continued into the 1990s, moving onto the newer Range Rovers, until the company started tuning the existing engines in 2003. The company went into administration back in 2010, but has since been revitalised by Autobrokers of Leeds, which had been selling Overfinches for the previous four years.