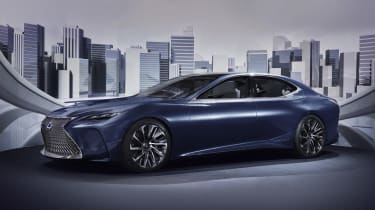 Lexus will display its LF-FC luxury saloon concept at the Geneva motor show, following its international debut at the Tokyo motor show in October 2015.

Described as a glimpse into the firm’s design and technology direction for a future flagship model, it’s the clearest indication yet of what we can expect from the next-generation LS range-topper.

While luxury market rivals from Audi, BMW and Mercedes have very much stuck to a three-box look for their flagship saloons, the LF-FC concept suggests Lexus might adopt a more coupe-like silhouette for the next LS, with a low roofline and slim glasshouse.

The look is accentuated by the concept’s 21-inch, carbonfibre-reinforced plastic alloy wheels, but Lexus has no plans to change its current spindle grille design, which is as imposing here as it is on production Lexus models. The mesh design is new however, and the firm’s dual-element front lights squint from prominent front wings. 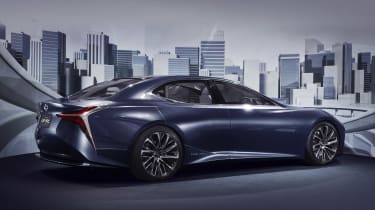 Lexus was the first manufacturer to introduce hybrid technology to the executive car class and following the lead of parent company Toyota, the LF-FC’s powertrain moves a step further, to hydrogen fuel cell technology.

The company sees fuel cells - a technology already in production with parent Toyota, with the Mirai - as 'the closest technology yet to the ultimate eco-car.

We're not quite as convinced, at least not until large quantities of hydrogen can be created without inputting huge amounts of energy through electrolysis or steam reforming from fossil fuels, but the end result does have benefits over battery-electric vehicles: namely quicker 'filling' times and potentially greater range. Lexus notes that a fuel cell vehicle's energy efficiency is twice that of current petrol and diesel engines.

In the LF-FC, power is sent to all four wheels – the front pair driven by in-wheel electric motors – with a torque-vectoring system to adjust power precisely to each wheel. The fuel cell itself is located in the rear, with a power control unit in the front and hydrogen tanks arranged in a T-shape underneath the car. No power, torque or performance claims are made of the concept. 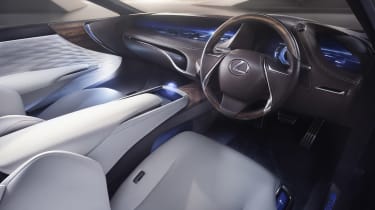 As BMW and Mercedes-Benz move the interior game further onward with the 7-series and S-class, Lexus has stepped up the game with its latest concept. It calls the resulting cabin ‘comfortable yet futuristic’, but maintains Lexus’ current thinking with distinct top and bottom layers to the dashboard architecture.

A suite of safety systems – including traffic environment recognition, prediction and judgement functions – help whisk driver and passengers to their destinations with minimal effort. Several controls are operated using hand gestures rather than touch, while images for the navigation, air conditioning and multimedia systems are projected into the air above the centre console.

Naturally, automated driving functions are also included - a suite of technologies including five radar units, a stereo camera, and six LIDAR sensors monitor the area around the car.

‘Lexus wants to surprise and evoke emotion with its distinctive design and forward-thinking technology’ explained Tokuo Fukuichi, Lexus International President. ‘For us, it is more than just a car; we want to exceed conventional imagination. The LF-FC expresses our progressive luxury and high-tech vision of a not-so-distant future.’

Read about more production cars and concept vehicles from the Geneva motor show on our show hub page.