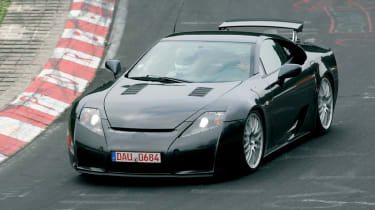 Here’s another look at the prototype of the Lexus LF-A supercar, this time caught testing at the Nürburgring. These latest spy shots suggest that the car is close to sign-off, lending credibility to the notion of a mid-2008 release.

While details remain frustratingly sketchy, it’s becoming increasingly clear that Toyota (of which Lexus is a sub-brand) is determined that the LF-A be seen as a genuine supercar. With the Nissan GT-R also due around the same time, expect some real fireworks once both cars have been launched; Toyota will be keen to maximise its F1 connections to prove its car is the sportier of the two.

Toyota will be giving the LF-A all the technology it needs to beat the Nissan too, including a V10 engine putting out over 500bhp and offering 200mph potential, plus ceramic brakes and a trick paddle-shift gearchange.

The LF-A’s arrival seems to have been delayed slightly by a high-level decision to respond to proposed new European legislation requiring each manufacturer’s average CO2 emissions to fall below the 130g/km mark. Toyota needed to ensure there were enough small cars in its future model line-up to be able to deliver such a tough average.

Bosses have also demanded that both Toyota and Lexus must now offer the option of hybrid power on every model in their ranges, so there'll be a hybrid version of the LF-A too.

Such thinking certainly dovetails with reports that the next Supra, which will evolve from the recent FT-HS concept, will also feature a hybrid powertrain complete with regenerative braking and capacitors to enable the stored power to be unleashed when exiting corners.

The Japanese sports car invasion won’t stop with these two models, as Toyota is said to be looking to re-enter the more mass-market sports car arena it once dominated with cars like the MR2 and Celica.

The Lexus LF-A will arrive first, though, and is expected to cost around £80K. Following closely behind will be the production version of the FT-HS, due in late 2008/early 2009.