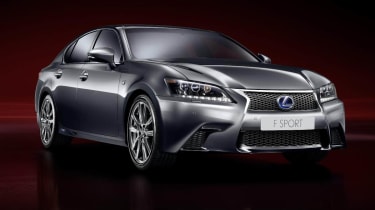 Lexus has unveiled F Sport versions of its two newest models. Both get suspension and styling tweaks, but no extra performance.

The BMW 5-series-rivalling GS saloon – which is yet to go on sale in the UK – will have its F treatment unveiled at the 2011 SEMA show in Las Vegas next month. It adds a welcome dose of muscle to the smart but unexciting GS, and will be an option across UK and Europe cars from 2012. On the outside, there are more aggressive bumpers and grilles, a new rear spoiler and dark metallic 19in alloy wheels. The interior gets a new red leather option as well as 16-way adjustable sports seats and plenty of F Sport badges. The changes are more than skin-deep, with retuned suspension. There’s a damping control system and tweaked rear shock absorbers, which are inclined further to the rear. The damping control allows the suspension to be set in either Normal or Sport modes. The latter is designed to reduce body roll and also sharpens up the steering, too. A drive select system allows further dynamic adjustments. Eco, normal, sport and sport+ modes alter the operation of the throttle, gearbox, air conditioning and Lexus Dynamic Handling system to bias towards either economy or performance. Dynamic Handling refers to Lexus’s four-wheel-steering setup, which can independently control front and rear steering angles to improve turn-in, rear grip and overall agility. It will make the GS450h F Sport the world’s first four-wheel steered hybrid, and we look forward to finding out if it helps make the GS something of a drivers’ car. If you’d prefer your hybrid F Sport to be a bit smaller, though, the CT200h F Sport arrives in the UK in January. Lexus’s hybrid hatchback gets a similarly butch body treatment, with new 17in alloys, mesh grilles and more eye-catching skirts and spoilers, while the interior gets black leather, an F Sport steering wheel and aluminium detailing. The suspension is overhauled, with a lateral damping system as standard, new spring rates and the fitment of sharper Kayaba dampers. Hopefully it’s enough to make the CT200h a more engaging drive than it is currently. The CT200h’s 69mpg and 94g/km economy figures are unchanged, but then so is the little Lexus’s tame 136bhp maximum (that’s petrol and electric combined) and 10.3sec 0-62mph time. It looks noticeably sharper than before, though, and sales begin in January. It costs £27,850, around £4400 more than a basic CT200h.