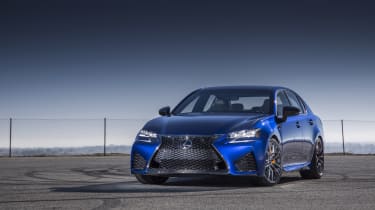 Lexus has unveiled its new GS F super-saloon at the Detroit auto show. The four-door saloon packs a naturally aspirated V8 and electronic systems honed for the race track. The hot-saloon sector might be dominated by Germans, but that hasn't stopped the Japanese carmaker from throwing a punch. Can it land a hit to the established cars of the class?

The Lexus is powered by a lovely, naturally aspirated 5-litre V8. We know it's lovely because we've already met it in the RC F.

Key tech features of the 32-valve unit include its ability to switch between Atkinson and Otto Cycles. The former enables the V8 to run efficiently for day-to-day running, while the latter gives it the punch to produce its full power.

Controlling which cycle the engine runs in are four modes: Normal, Sport, Sport + and Sport +S (designed for track use). These sharpen up throttle response and the harshness of the eight-speed automatic gearbox, to give the new GS F a wide window of usability. 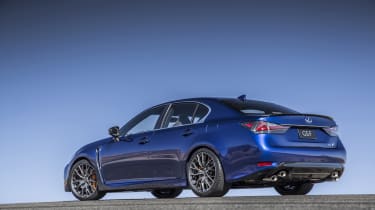 The new Lexus' power is down on its main rival, with the BMW M5's 552bhp substantially more brutal than the GS F's 470bhp. The Japanese machine falls even further behind on torque, with the turbocharged German's 501lb ft dominating the GS F's 391lb ft.

But no worry, the GS F can make up for that lost power as the lighter saloon, right? Not exactly, because the Lexus weighs in at 1830kg, 115kg less than the M5, but is that enough to make up the power deficit? Probably not.

That's not the point of this GS F though, because the new hot saloon has been developed for driving engagement rather than big numbers. That's why it gets complex, track developed high-speed stability control systems, topped by torque vectoring to sharpen up the weighty car. 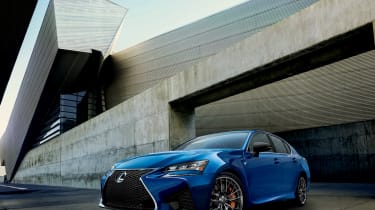 Three settings for torque vectoring are configured into the car, comprising Standard (default), Slalom (to sharpen up steering response), and Track (to maximise the car's high-speed stability).

The bodyshell has also been reinforced and the suspension has been optimised on the Nordschleife to give the GS F much potential to satisfy as a drivers' car.

Lexus is yet to confirm pricing, but given that the BMW M5 and Mercedes' E63 AMG are rivals, we expect prices to start around £70,000. If the price falls closer to £60,000, it might be the factor that helps the less powerful Lexus stand a real chance of taking it to the Germans. 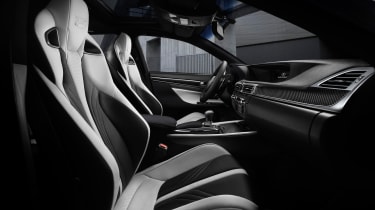