Lexus adds a 'Ring handling pack to the LFA. When's the lap time going to be announced? 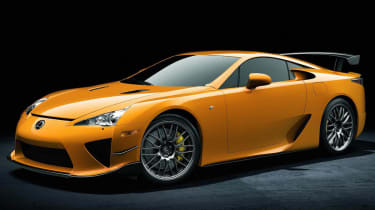 Although the first customer deliveries aren’t due to start until 2011 Lexus has already announced that a limited run of LFA’s will be produced with a track-focused Nürburgring package.

50 of the 500 LFA’s Lexus is producing are earmarked for the Nürburgring package treatment that sees aerodynamics, engine, gearbox and suspension all tweaked. The changes add up to an overall package that focuses on improved driving characteristics rather than outright speed.

A larger front spoiler, side fins and fixed rear wing provide additional downforce whilst an extra 10bhp has been liberated from the engine to take power to 562bhp. Gearshift times have also been cut to 0.15 seconds though the 0-62mph time and top speed remain the same at 3.7secs and 202mph respectively. Revised sports suspension and a new wheel and tyre package complete the makeover.

Buyers will also have the option to take part in a driving tuition programme at the Nürburgring as well as receiving a one-year pass to the circuit.