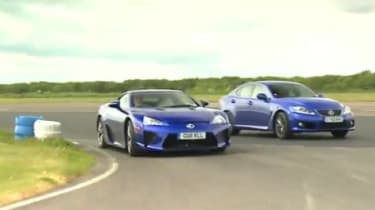 The first full-production Lexus LFA supercar in the country finally made its debut UK track appearance, jousting against its high performance IS-F sibling.

During a special event at Bruntingthorpe proving ground, the V10 Japanese two-seater showed off its power and speed, after wowing crowds earlier this month at the Goodwood Supercar Sunday Breakfast Club.

Showcasing a 0-60mph of 3.5sec and a top speed of over 200mph, this display must have heartened the 500 owners-to-be, who have already paid a deposit on the £336,000 supercar and have seen delivery dates pushed back because of production difficulties.