Lexus LFA laps the Nurburgring in 7:14

The Nurburgring edition LFA has set a blistering unofficial lap time around the Nordschleife. Details and image gallery. 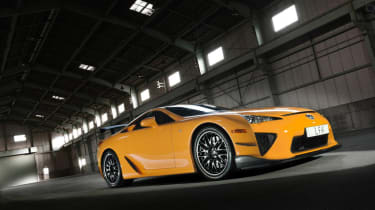 In a fitting tribute to its nomenclature, the Lexus LFA Nurburgring Edition has set a blistering lap of seven minutes fourteen seconds around the infamous German circuit.

It comes following what many saw as a fairly tame 7:22 exhibition lap in a Nurburgring edition by Gazoo Racing Driver Akira Iida recently. This new lap serves to confirm the LFA as one of the fastest supercars to ever lap the thirteen-mile track.

It is all the more interesting when you take into account that the Nurburgring Edition is not significantly altered from the standard Lexus range-topper. The 4.8 V10 is tweaked to produce an extra 10bhp only, taking the total to 562. Along with the engine upgrades, the gearbox was reconfigured for faster shifts, the suspension was stiffened-up and made adjustable. In terms of aerodynamics, it features a fixed rear spoiler (as opposed to the speed controlled one in the regular LFA) and new aerodynamic canards at the front, in a similar vain to the Porsche 911 GT3 RS 4.0.

The OEM tyre of the Nurburgring Edition are performance-oriented Bridgestone Potenza RE70s, and it is on these that the 7.22 lap time was set. No official details have yet been released about the 7:14 lap and which tyres were used. If the time is validated, it would make the LFA the fourth fastest production car around the Nurburgring.